THE FIRST of 50 trains being supplied by China South Locomotive and Rolling Stock (CSR) to Kuala Lumpur for the Ampang Line extension was presented to representatives of the city's transport authority Prasarana at the CSR Zhuzhou plant on February 27. 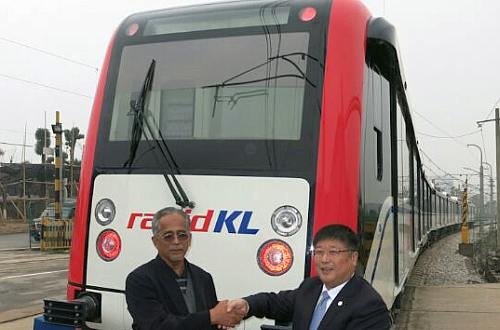 The 750V dc trains will accommodate up to 1308 passengers and have a maximum speed of 80km/h. The six-car sets are based on metro trains supplied by CSR Zhuzhou to Izmir, Turkey, and are designed specifically to operate on the sharp curves and steep gradients of the Ampang Line.

Prasarana expects to receive the first train in the fourth quarter of this year.

The initial 7.4km four-station phase of the Ampang Line extension from Seri Petaling to Bandar Kinrara is due to open on October 30 2015, while commercial services are due to start on the remaining 10.3km seven-station section to Putra Heights in March 2016.

The extension is expected to double ridership on the Ampang Line to more than 400,000 passengers per day.