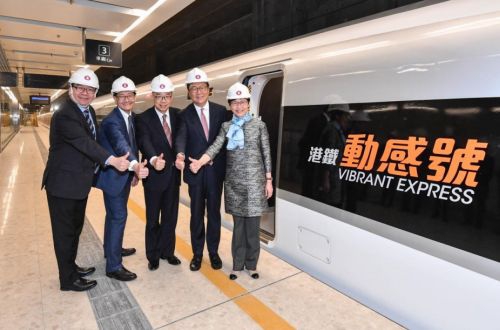 When the line opens later this year trains will operate at 15-minute intervals between West Kowloon and Shenzhen North, with alternate trains continuing to Guangzhou South. There will also be 33 high-speed services a day from Hong Kong to cities in mainland China.

MTR says the overall project was 99.2% complete at the end of February.

“We look forward to the completion of the Express Rail Link, a major project which will bring Hong Kong a better future,” Lam says. “The project has gone through years of planning and various challenges during its construction. While the completion of the project is approaching, it is important to remember that it has been a joint effort, with great professionalism and a spirit of striving for excellence being shown by the engineering teams and regulating departments involved, which together have overcome the challenges they faced.”

“We are thrilled to see this project coming to fruition,” says MTR Corporation chairman Professor Frederick Ma. “The construction of this cross-boundary railway connection has never been an easy feat. We have overcome various challenges during the past few years and it is exciting to see that the railway is ready to proceed to its trial operations. In the coming months, we will continue to make our best endeavours to get ready for commissioning the rail service this September.”

During the ceremony Lam also unveiled ‘Vibrant Express’ as the brand name for Hong Kong - Shenzhen - Guangzhou high-speed services. The name was selected by a judging from more than 16,000 suggestions submitted in public competition launched by MTR in January.

“‘Vibrant Express’ was selected as it can best demonstrate the Hong Kong’s characteristics - a vibrant city bursting with energy,” Ma says.