HYDERABAD’s metro network became the second-largest in India on September 24, when the governor of Telangana and Andhra Pradesh, Mr Ekkadu Srinivasan Lakshmi Narasimhan, led the celebrations to mark the inauguration of the 17km Ameerpet - LB Nagar section of the Red Line. 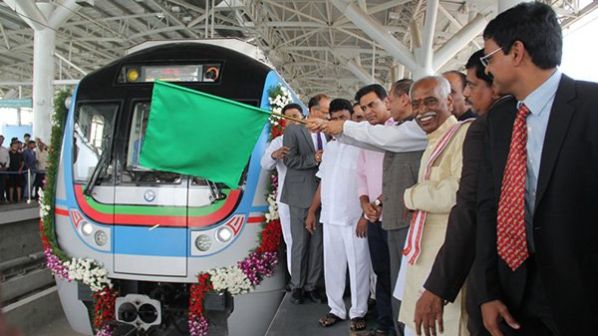 The extension serves eastern districts of the city and adds 16 stations to the network.

Services operate at 6.5-minute headways in the peak and every eight minutes off-peak.

The completion of the Ameerpet - LB Nagar stretch takes the network to 46km, placing Hyderbad behind Delhi in the rankings of India’s largest metro systems.

The first section of the network opened in December 2017, when India’s prime minister Mr Narendra Modi inaugurated the 13km section of the Red Line from Miyapur to Ameerpet and the 17km Ameerpet - Nagole stretch of the Blue Line.

The 72km first phase is being built by L&T Metro Rail under a PPP concession awarded in 2010.