HYUNDAI Rotem signed a memorandum of understanding (MoU) with Iranian Islamic Republic Railways (RAI) in Tehran on May 3 which will provide a basis for formal negotiations for a contract to supply 150 DMU cars for Raja Passenger Train Company. 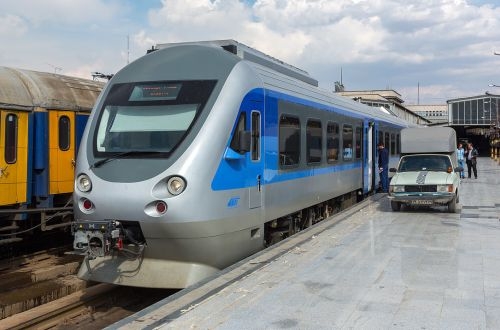 The MoU was one of 66 industrial co-operation agreements signed during this week's state visit of Korean president Mrs Park Geun-hye to Iran.

Hyundai Rotem says it expects to conclude a contract by the end of July. Under the terms of the MoU Korea's Ministry of Strategy and Finance will finance 85% of the contract, which has an estimated value of around $US 260m.

Hyundai Rotem was awarded a contract in 2004 to supply 150 regional DMU cars to RAI. The first 24 trains were built in Korea, with 24 trains to be assembled locally from kits by locally by Iranian Rail Industries Development (Irico). The remaining sets would be built by Irico with support from Hyundai Rotem.

However, the imposition of international sanctions on Iran in 2010 meant only 68 vehicles were delivered without payment to the Korean manufacturer. Irico resumed production of the DMUs in July 2015 and the company delivered its 17th train to RAI in February, with further sets on the assembly line.

With the lifting of sanctions, Hyundai Rotem says it will now hold negotiations with RAI with the aim of recovering the $US 76m it is owed for the trains it delivered prior to 2010 and completing the original order.