THE Korean city of Incheon opened its second metro line on July 30, almost 17 years after the opening of Line 1. 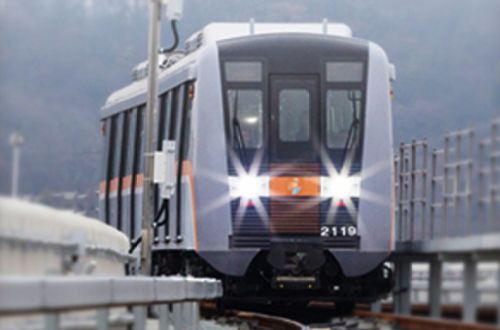 Unlike the first line, which was completed in 1999, Line 2 is a standard-gauge driverless light metro line and links the north of Incheon to the south and southeast of the city.

The journey time between the termini at Geomdan Oryu and Unyeon is 48 minutes, and the line serves a number of interchanges including Geomam (Airport Railroad/KTX), Juan (Seoul Line 1) and Incheon City Hall (Incheon Line 1). Construction is also underway on an extension of Seoul Line 7, which will include an interchange with Incheon Line 2 at Seoknam.

Services are operated by a fleet of 37 two-car trains supplied by Hyundai Rotem, each accommodating up to 278 passengers. The AGT rubber-tired trains are based on those supplied for Busan-Gimhae Light Rail Transit and the line is equipped with the same RF-CBTC system as the Sinbundang Line and the Busan-Gimhae LRT.

Due to the shorter trains, 460 services will operate each weekday with trains running every three minutes at peak times and every six minutes at other times.

Construction began on the Won 2.26 trillion ($US 2bn) project in June 2009 and according to the Incheon Urban Railroad Construction Headquarters, light metro technology was adopted for its reduced noise, lower energy consumption and capital cost - construction was estimated to be 20-35% less costly than building another conventional metro line.

While there have been concerns about overcrowding and whether two-car trains will be sufficient to meet demand, station staff have been trained to manage crowding at busy times and it will be possible to extend trains to four cars if required in the future.