THE expansion of the broad-gauge network in northeast India reached another milestone on January 24, when the first broad-gauge passenger train on the Agartala - Udaipur line in Tripura was flagged off by railways minister Mr Suresh Prabhu via a video link from Dehli. 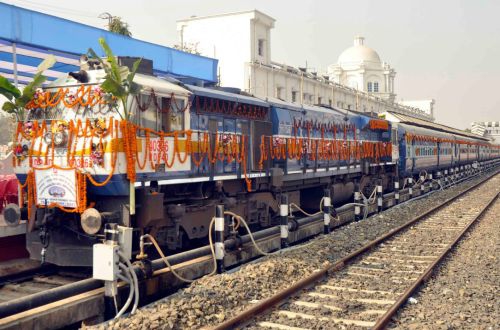 Two passenger services will operate every day except Sunday on the 44.8km line, which extends the national 1676mm-gauge gauge network to the district of Gomati for the first time.

At the inauguration ceremony, Northeast Frontier Railway CEO Mr Ashok Kumar Jadav confirmed that by 2019 broad gauge tracks will be extended from Udaipur to Sabroom, where a new bridge will be constructed across the Feni river to connect the line to the Bangladesh Railways network. This will give Tripura a direct rail link to the Bangladeshi port of Chittagong, which is just 75km from Sabroom.