INDIA's northeastern state of Tripura finally joined the national broad-gauge network on January 13, when minister of state for railways Mr Manoj Sinha greeted the arrival of the inaugural broad-gauge train in the state capital Agartala. 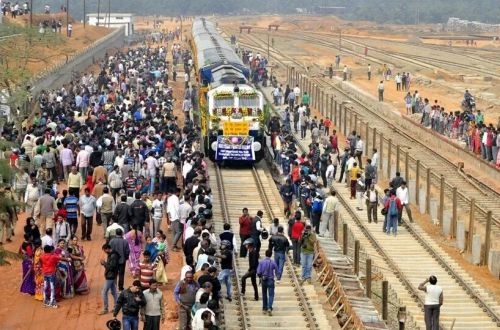 The Northeast Frontier Railway suspended metre-gauge services between Badarpur in the neighbouring state of Assam in September to enable the conversion of the 227km line to 1676mm-gauge. The project is part of a broader programme of gauge conversion works in the northeast, which is intended to improve the region's rail links to the rest of India.

Sinha says broad-gauge tracks will be extended to Sabroom on the border with Bangladesh by March 2017 and a second connection from Agartala to the Bangladesh Railways network at Akhaura is also planned. These links will give Tripura a direct rail connection to the Bangladeshi port of Chittagong.