Upgrades to the 55km Mahesana - Varetha line and electrification of 264km Surendranagar - Pipavav line among the projects. 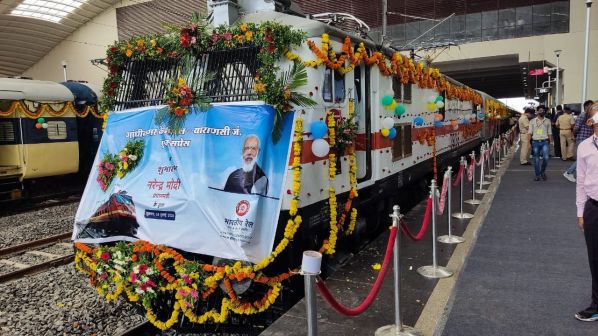 ELECTRIFICATION and gauge conversion of the 55km Mahesana - Varetha line was one of several projects inaugurated via a video link by Indian prime minister, Mr Narendra Modi, in his home state of Gujarat on July 16.

The Mahesana - Varetha upgrade cost Rs 3.7bn ($US 50m) and the line is now connected to the Ahmedabad - Delhi 1676mm-gauge line as well as the Modhera - Vadnagar - Patan heritage circuit, which will help to boost tourism in the region. The line has 10 stations and the project included the construction of new buildings at Vadnagar, Visnagar, Varetha and Kheralu.

Modi also inaugurated the electrification of the 264km Surendranagar - Pipavav line, which has been completed at a cost of Rs 2.9bn. Overhead catenary supports the transport of double stack containers and will function as a feeder route for the Western Dedicated Freight Corridor, providing seamless transport of goods without change of traction from Palanpur, Ahmedabad and other parts of India to Pipavav port. The section will also decongest the Ahmedabad, Surendranagar and Viragram yards by avoiding the need to stable locomotives.

Finally, Modi inaugurated the upgraded Gandhinagar station, while flagging off two new trains: the Gandhinagar - Varanasi superfast express and the EMU services between Gandhinagar and Varetha.