AFTER a two-year wait, Indian Railways (IR) finally launched its fastest inter-city service on April 5, when railways minister Mr Suresh Prabhu flagged off the Gatimaan Express on its maiden run from Delhi to Agra. 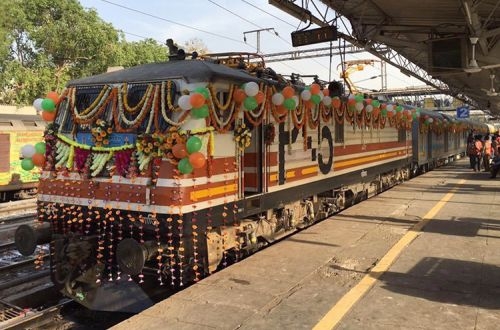 Billed as the country's first semi-high-speed train, the Gatimaan departs Hazrat Nizamudoin station in Delhi every day except Friday at 08.10, taking 1h 40min to complete the 188km run to Agra and operating at speeds of up to 160km/h. The return service leaves Agra at 17.50 and arrives in the capital at 19.30.

The train is formed of eight air-conditioned chair cars, two executive class coaches and two pantry cars. In terms of speed, the Gatimaan is faster than the Bhopal Shatabdi launched 28 years ago, which covers the same distance in 1h 50min.

"India's rolling stock is capable of running at 200 km/h, but speed is constrained by extraneous factors such as the lack of funds to build fences alongside tracks," says Mr Arun Arora, divisional railway manager at Delhi.

As well as offering higher speeds, the Gatimaan also represents an attempt to improve the passenger experience. The train is equipped with features including hotspot entertainment options and LED reading lights. Coaches are decorated with paintings of places of historical importance in Agra and Delhi.

Catering services have been enhanced, with a choice of Indian, international and healthy meals served from a trolley.

The Gatimaan is aimed at the tourist market and IR is offering one or two-day packages which include entry to historical sites such as the Taj Mahal and Fatehpur Sikri.

The launch of the Gatimaan is seen as "work in progress," by IR as the Commissioner of Railway Safety has only given the train conditional approval to operate at higher speeds, subject to completion of infrastructure work including lineside fencing. Approximately 80km of fencing has been completed so far on vulnerable sections of the route.

The Train Protection and Warning System (TPWS) is currently only operational on the Nizamudin -Palwal section and needs to be extended to Agra, while track renewals are also incomplete.

However, a huge amount of symbolism is attached to the launch of the Gatimaan; as similar semi-high speed services are planned on eight other routes across India.