THE Indonesian government has announced that it will move ahead with plans to extend the Chinese-backed 142.3km Jakarta - Bandung high-speed line to Surabaya, despite failing to obtain Japanese support for the project. 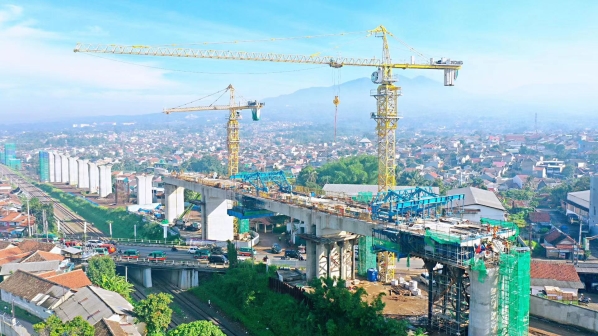 Japan, which was previously outbid by China to construct the line, rejected Indonesia’s invitation for a consortium of Japanese investors to build the extension, saying it will focus its involvement in the separate Jakarta - Semarang - Surabaya conventional rail project.

Mr Luhut Pandjaitan, Indonesia’s minister for investment, subsequently offered China the opportunity to build the extension during a meeting with Mr Wang Yi, China’s foreign minister. The Indonesian government says that it is also open to investment in the project from other countries.

The Bandung - Surabaya extension, which will run via Yogyakarta in southern Java, is intended to improve the economic viability of the Jakarta - Bandung project. It was hoped Japanese involvement in the project would accelerate work, which has suffered serious delays. The Jakarta - Bandung line was originally due for completion in 2019 but has since been delayed until the second half of this year.

The 350km/h Jakarta - Bandung line will serve four primary stations: Halim in Jakarta, Karawang in West Java, and Walini and Tegaluar in Bandung, and is expected to cut end-to-end journey times from three hours to 45 minutes.

The consortium building the $US 6bn project, PT Kereta Cepat Indonesia China (KCIC), announced that work on the project was 63.9% complete at the end of 2020, despite disruption caused by the Covid-19 pandemic.

The Jakarta - Surabaya mainline project, which will run west-east in the north of Java, has an initial investment of $US 4.3bn and construction is expected to begin in 2022 and finish in 2025. Indonesia and Japan signed an agreement for the project in 2019.