JAKARTA's long-abandoned monorail project, which left rows of supporting pillars in Senayan in Central Jakarta and Kuningen in the south of the city, could be set for a revival following a fresh injection of funds from Ortus, Singapore. 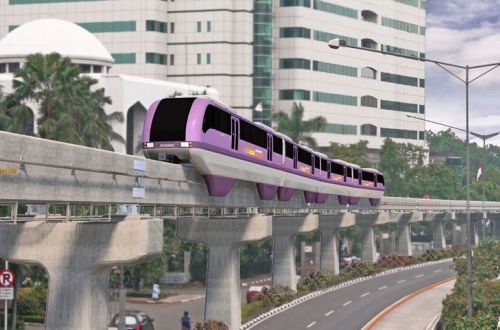 According to The Jakarta Post, Ortus has agreed to invest $US 300m in Jakarta Monorail (JM), the consortium which will construct and operate the system, in exchange for a majority share holding. The partnership with Ortus, which is held by Edward Soeryadja, also appears to have dashed the long-held hopes of Hadji Kalla Group, which is held by the rival Kallas family, to take over the project.

With the cash injection, JM is expected to kick start the project which has two proposed lines. The abandoned Green Line will run 14.3km from Komdak, South Jakarta, to Satria Mandala Museum in South Jakarta and will have 16 stations, while the Blue Line will run 9.7km from Kampung Melayu in East Jakarta to Roxy in West Jakarta with 11 stations. The projects are estimated to cost $US 725.6m.

Ortus' shareholding in the project is yet to be determined, with the company set to either purchase new shares issued by the company, or buy existing shares from shareholders. However, at this point it is far from a done deal. According to the newspaper, Ortus' entry may still be at risk should one of JM's major shareholders, state-run construction company PT Adhi Karya, reject the offer. At this point The Kalla Group may find a way to rekindle its hopes of taking over JM, and proceed with its plans to inject $US 729m into the project.

According to Mr Andi Asmir, Hadji Kalla Group corporate secretary, as long as uncertainty surrounds Ortus' involvement in the project, his company will continue its fight to be involved.

"With the current situation, the [Kalla] group will not back down from the project," he says.

• Meanwhile Jakarta governor Mr Joko Widodo says development of the city's metro system will begin next month through the initiation of a detailed planning process for a north-south line. The first phase of the project is the 15.2km line from Lebak Bulus to Hotel Indonesia traffic circle, and it is hoped that the line will be operational by the end of 2016. The second phase of the project is the 8.1km extension from Hotel Indonesia to Kampung Bandan in North Jakarta which is expected to be completed by 2018.

The line will be a combination of elevated and underground sections designed to minimise impact on traffic. However, residents in South Jakarta have voiced their opposition to the project due to concerns of the impact it will have on their neighbourhoods.