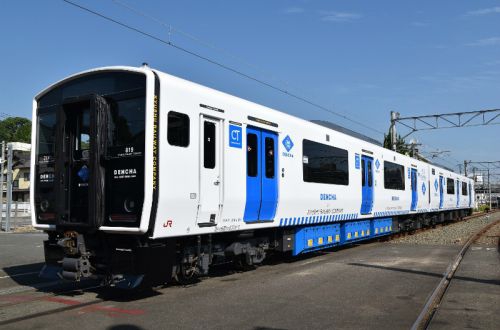 The two-car 819 series set draws power from the 20 kV ac 60Hz electrification system to feed a bank of onboard batteries, which give the train a wire-free range of up to 90km.

The pre-series train was delivered in April and JR Kyushu is planning to conduct a series of trial runs with passengers before the train enters revenue service. A further six trains are due to be introduced by spring 2017.

The 819 series is based on the existing 817 series EMU and was built by Hitachi at its plant in Kudamatsu in Yamaguchi prefecture.

Around 40% of JR Kyushu's networkremains unelectrified and battery EMUs are seen as a cost-effective alternative to purchasing new DMUs.