THE president of Germany, Mr Joachim Guack, Korea's minister of unification, Mr Hong Yong-pyo, and the CEO of Korail, Dr Choi Yeon-hye, joined 300 guests to mark the opening of a unification exhibition at Dorasan station near the border with North Korea on October 14. 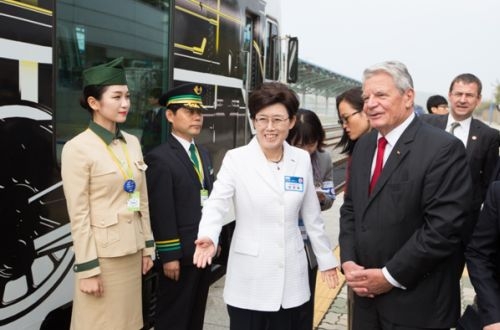 A special unification platform covering 240m2 has been built south of platform 1 with a section of the former Berlin Wall, a US military caboose which ran between East and West Germany during the Cold War, an inter-Korean freight wagon which operated between the two Koreas to Kaesung during 2007, a map of the Trans-Eurasian Railway, and Korean citizens' messages of unification.

The inter-Korean freight wagon is covered with images of the demilitarised zone and the landscape of North Korea. It contains a section of barbed-wire fence from the former border between East and West Germany, German State Railway (DR) police uniforms, German customs inspection tools, and items of the restoration ceremony for the Gyeongui line.

There is also a unification gate engraved with peace and unification messages in different languages and a unification time wall to compare the period of German reunification with the situation in Korea. A total of 60 messages of hope for unification are engraved in marble and were chosen by North Korean defectors, separated families, Korean War veterans, and Korean citizens. There are also messages from the German president and Korea's president Ms Park Geun-hye.

"Dorasan station attracts more than 800,000 visitors each year, and I hope the Unification Platform will become a symbolic landmark attraction," Choi says. "I also hope that railways, such as the Inter-Korean railway, will act as a catalyst for unification."