Korea marked the completion of a key transport project for the 2018 Winter Olympics on December 22, with the opening of the 120.7km Wonju - Gangneung section of the Gyeonggang Line. 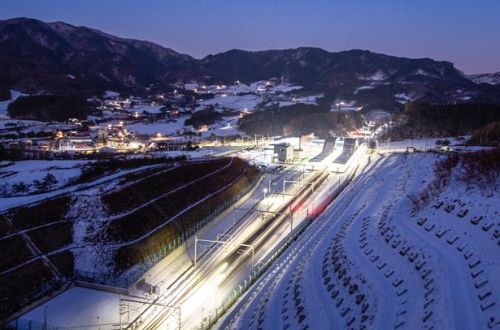 The new route connects with the first section of the Gyeonggang line, providing a new link from Seoul to the east coast of the country. The 250km/h line is used by both regional services and Korail KTX high-speed trains, reducing the journey time between Seoul and Gangneung, a city of 213,000 inhabitants on the east coast, to just 1h 54min. This compares with the previous six hours by Mugunghwa train or three hours by coach.

During the Olympics the line will provide a direct high-speed connection between Incheon International Airport, Seoul, and the venues of the PyeongChang 2018 Winter Olympic Games. A new extension to Incheon airport Terminal 2 is due to open on January 12.

Up to 20,910 passengers are expected to use KTX services between Incheon, Jinbu (PyeongChang) and Gangneung each day during the games, which will be held on February 9-25.

There will be 51 trains per day during the games, with a journey time of 1h 7min between Seoul and PyeongChang.

Construction began on different sections of the route in 2013 and 2014, with 63% of the line running in tunnels, including the 21.7km Daegwallyeong Tunnel, Korea’s longest mountain-based at 21.7km. The Won 3.76 trillion ($US 3.5bn) railway has six stations and is equipped with an LTE-R telecommunications network.