SOUTH Korea’s Ministry of Land, Infrastructure and Transport and the Korea Rail Network Authority opened a new section of the Donghae Line from Pohang to Yeongdeok on January 26. 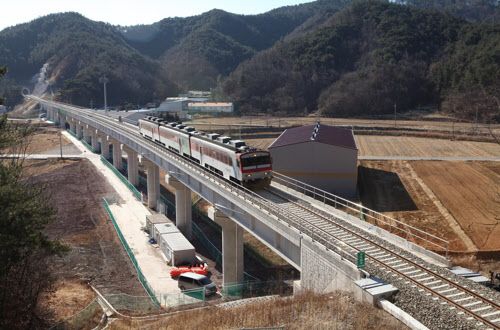 The line is part of a long-term project to establish a rail link along the east coast of the Korean peninsula between Gangwon province in the north and Gyeongsang province in the south.

Korail will operate 14 Mugunghwa trains a day on the line, with a journey time of 34 minutes. Passengers travelling on KTX services from Seoul will be able connect to Yeongdeok trains at Pohang.

The remaining section of the line from Yeongdeok north to Samcheok is expected to open in 2020 and will complete the new inter-regional coastal connection.

The entire Donghae Line will eventually stretch from Samcheok in Gangwon, and run through Pohang, Gyeongju, and Ulsan, terminating at the southern port city of Busan in the southwest of the country. The Bujeon - Ilgwang section opened at the end of 2016, with the Ilgwang - Taehwagang stretch in Ulsan due for completion in 2019.