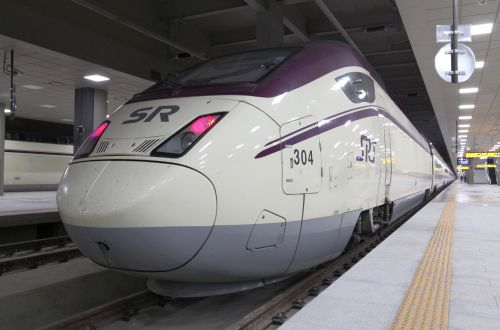 Previously residents in these areas have had to spend extra time travelling north to Seoul or Yongsan stations in order to use high-speed services. The terminus, Suseo station, is also located much closer to one of Korea’s main business districts which is likely to provide high demand.

The new line has three stations – Suseo (Seoul), Dongtan (Hwaseong City) and Jije (Pyeongtaek City), with the remainder of the route connecting to the main high-speed line used by Korail’s KTX services. SRT services do not travel to all parts of the high-speed network, and passengers will need to transfer to KTX services to access some stations.

Travel time between Seoul and other cities using the SRT is generally shorter than the KTX due to the more southern location of the station and because SRT services are not forced to reduce speed when entering Seoul.

The fastest services to Busan and Mokpo offer journey times of 2h 9min and 2h 6min respectively. SRT fares are also 10% lower than the KTX equivalent, which has flared competition, with Korail offering new discounts and a rewards systems in a bid to retain patronage.

Construction began in 2011 and and the new line was completed in June 2015. The main engineering feature of the new line is the Yulhyeon Tunnel, which at 52.3km is the longest in Korea and one of the longest railway tunnels in the world. Dongtan station is also Korea’s first high-speed station to have been built completely underground, with platforms located six storeys below street level. Only 7% of the 61.1km line runs on a surface alignment.

SRT services use KTX-Sancheon trains produced by Hyundai Rotem, with the fleet comprising 10 new trains and 22 trains leased from Korail, which are due to transfer to SR ownership before the end of the year.

Over the past decade, patronage of KTX services has continued to grow and tickets often sell out at weekends. The opening of the SRT boosts the total number of high-speed weekend services operating in Korea by 43% from 269 to 384.