A month of free rides began on November 1 on services to the four new stations added to Kuala Lumpur's Ampang light metro line from Sri Petaling to Bandar Kinrara. 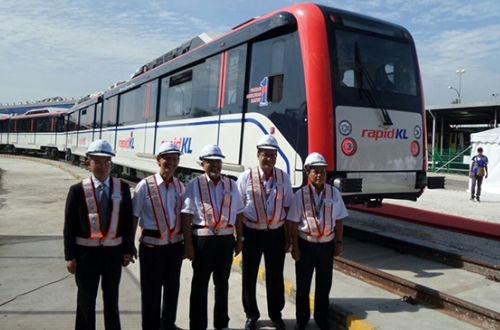 Amy was unveiled by CRRC in January 2015.

The 5.5km extension is the first phase of the 18.6km extension project to Putra Heights and is expected to add 30,000 passengers to the service and reduce road congestion in Puchong. Passengers using the service between Sri Petaling and the four new stations at Awan Besar, Muhibbah, Alam Sutera and Bandar Kinrara 5, where there is a park-and-ride facility, are able to request tokens for the free rides from customer service officers.

To meet the demands of the extension, the line's operator Prasarana ordered 20 new six-car trains from CRRC Zhuzhou Electric Locomotive in April 2012. Three of the 750V dc trains have entered service for use on the Bandar Kinrara extension offering a 12-minute service with two in reserve.

The remaining 15 vehicles will be introduced to serve the full extension to Putra Heights, while a subsequent order was placed in October 2014 for 30 vehicles to replace the line's existing fleet which entered service in 1996.

The trains dubbed Amy have capacity for 1308 passengers and have a maximum speed of 80km/h. Nine of the sets are being manufactured at CRRC's Malaysian factory in Batu Gajah, Perak.

This is the first extension to the Ampang Line since it opened in 1996, with the complete extension set to connect with the 17km extension of the Kelana Jaya line to Putra Heights, which is due to open in June 2016.