HEADS of state from Turkey, Azerbaijan and Georgia convened at the Port of Baku on October 30 for a ceremony marking the official completion of the 826km Kars - Tbilisi - Baku railway. 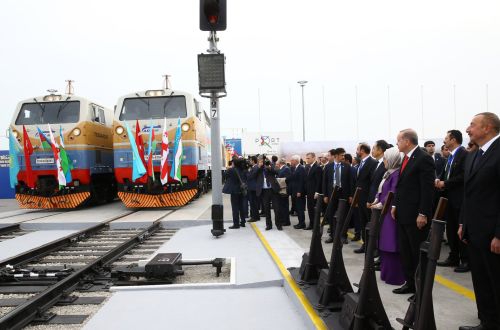 The project is a key component of a plan to create a new rail corridor linking Europe and Turkey with the Caspian Sea.

The project involved constructing a new 105km standard-gauge line from Kars, Turkey, to Akhalkalaki in Georgia, where a new transhipment terminal has been constructed. Georgian Railways’ 1520mm-gauge line from Akhalkalaki to Marabda near Tbilisi has also been reconstructed for its new role as an international corridor.

“Baku - Tbilisi - Kars is part of a big Silk Road and it’s important that we have implemented this project using our own funds,” Turkish president Mr Tayyip Erdogan said at the inauguration ceremony, which was also attended by Azerbaijan’s president Mr Ilham Aliyev and Georgian prime minister Mr Giorgi Kvirikashvili.

Construction began in 2008 and the project was originally scheduled for completion in 2010, but the opening date has been repeatedly pushed back.

Commercial operations on the corridor are expected to begin before the end of this year and annual volumes of around 6.5 million tonnes are forecast for the initial phase of operation.

Azerbaijan Railways (ADY) has procured a new fleet of 30 variable-gauge coaches from Stadler for overnight services on the route. The coaches are equipped with adjustable wheelsets to enable operation on both 1435mm and 1520mm-gauge infrastructure.