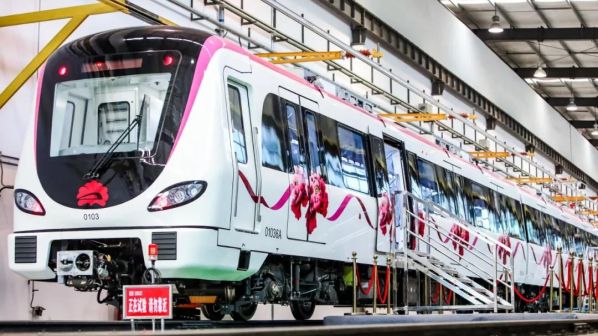 THE city of Luoyang in central China’s Henan province opened its first metro line on March 28, the 25.3km Line 1, which has 19 stations and runs west-east from Hongshan to Yangwan.

Tickets went on sale from 10.30 with over 100,000 journeys taken by the end of the day. Services are operated using 80km/h six-car Type B trains supplied by CRRC Zhuzhou. The trains have capacity for 2062 passengers, and are serviced at a depot at Hongshan with stabling facilities at Chandong.

Construction of the line commenced in June 2017 and the control centre in December 2018. Track laying began in April 2019 and was completed by December that year.

Line 2 is also nearing completion. The line extends for 27.6km on a north-south alignment with 15 stations, and is expected to open at the end of the year. The city is planning to open 12 metro lines by 2035. Luoyang is the 40th city with a metro in mainland China.

Meanwhile, the city of Ji'nan, the provincial capital of Shandong province, opened its second metro line on March 26th. Line 2 runs east-west between Pengjiazhuang and Wangfuzhuang, where a connection to the north-south line 1 is provided. The 36.4km line serves 19 stations and offers an interchange with the north-south Line 3 at Bajianpu. Services are operated by 100km/h six-car Type B trains supplied by CRRC Qingdao.