PRASARANA and CSR Zhuzhou, China, signed a contract for 30 additional six-car metro trains for Kuala Lumpur's Ampang Line at a ceremony at the Kuala Lumpur Hilton on October 21. 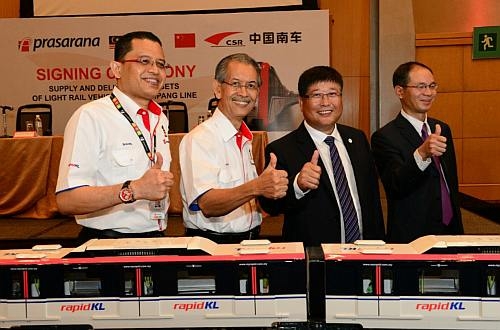 Deliveries will commence next May and the final train is due to arrive by the end of July 2015, allowing Prasarana to replace the line's existing train fleet.

The 750V dc trains will accommodate up to 1308 passengers and have a maximum speed of 80km/h. Nine of the trains will be assembled at CSR's Batu Gajah plant in the Malaysian state of Perak.

CSR is already supplying an initial batch of 20 trains for the extension of the Ampang Line to Bandar Kinrara and Putra Heights.