CHINA's National Development and Reform Commission has approved a public-private partnership deal for Line 1 of the Hangzhou metro. 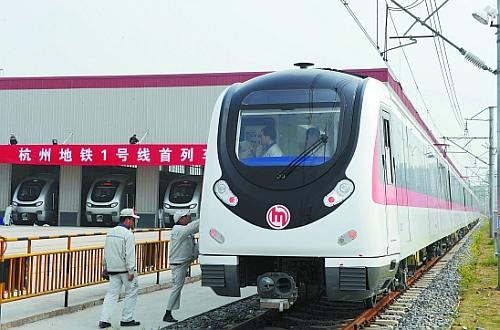 One of the new trains for Hangzhou on CSR Puzhen's test track.

This paves the way for MTR, which operates the rail network in Hong Kong, to set up a joint venture company with Hangzhou Metro Group (HMG) to invest in and operate Line 1 for 25 years. MTR will have a 49% stake in the new company.

MTR and Hangzhou Metro Group entered into a concession agreement with Hangzhou Municipal Government in March 2010, but this was subject to approval by the relevant Chinese authorities.

HMG has funded the civil works which account for 62% of the total cost of Yuan 22bn ($US 3.46bn). The joint venture is responsible for the mechanical and electrical element of the project including the rolling stock which equates to an investment of Yuan 8.3bn. CSR Puzhen has supplied a fleet of 48 six-car trains for Line 1 styled by MBD Design, France.

Construction of the 48km Line 1, which has 31 stations, started in March 2007, and is due to open in October. Work started on the 34.7km southeastern section of Line 2 in September 2008 and is expected to open before the end of next year.