RUSSIAN Railways (RZD) began operation with the first of three new Transmashholding EP3D EMUs on the Far Eastern Railway on August 30 with a commissioning at Vladivostok station, terminus of the Trans-Siberian Railway. 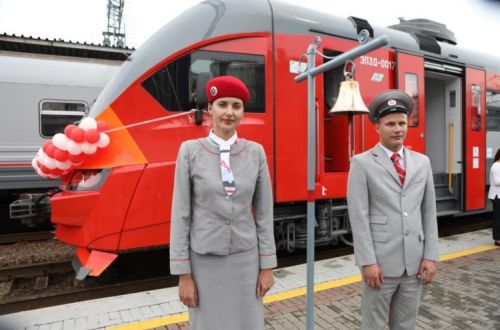 The new EP3D EMUs are replacing life-expired trains in Vladivostok.

The event was attended by the management of the Far Eastern Railway as well as representatives of the executive and legislative authorities of the Primorsky Territory.

The trains, built by Transmashholding (TMH) subsidiary Demikhovsky Machinery Plant (DMZ), feature improved passenger comfort. The design takes transport security and the technical regulations of the customs union into account. TMH says the cost of operating the trains, which have a service life of 40 years, has been reduced by 20-50%, while maintenance costs have been reduced by 20-40%.

Passengers and staff are protected by an improved collision protection system installed on the train, while the vehicles are equipped with fire extinguishers and devices for the rapid evacuation of passengers in the event of an emergency.

One five-car and two four-car sets are now in service on the Far Eastern Railways, replacing life-expired trains on the busiest services.