THE first of 14 four-car light metro trains being built by Bombardier Transportation and Hartasuma for operation on the Kelana Jaya Line in Kuala Lumpur was presented to Prasarana Malaysia and the operator Rapid KL on January 18. 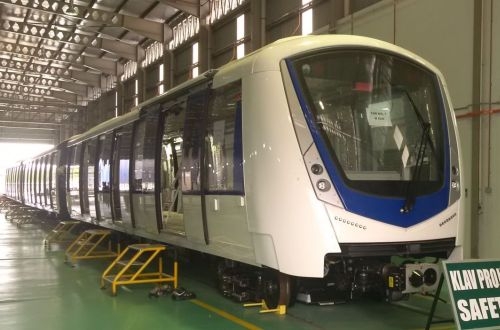 The first of the new Bombardier trains for Kuala Lumpur at Hartasuma's facility in Malaysia.

The Ringgits 577.6m ($US 128m) contract was awarded by Prasarana in March 2013. The car bodies are being built at Bombardier's plant in Kingston, Canada, and fitted out at Hartasuma's facility in Westport, Malaysia. Delivery of the trains is due to start in mid-2016.

The Innovia Metro 300 trains are designed for driverless operation and are powered by linear induction motors. Each train can carry up to 786 passengers.

The new-generation trains feature a curved car body and larger front window to improve visibility. They are designed to consume less energy than the previous generation, for example by using LED lights. Screens will display passenger information and advertisements, and there will be dynamic route maps.

The trains are needed to increase capacity on the Kelana Jaya Line which currently carries more than 200,000 passengers per day. The line is also being extended by 17.4km from Kelana Jaya south to Putra Heights integrated station. The extension, which is due to open on June 30, has 13 stations, all of which are provided with lifts, escalators, and facilities for disabled passengers including ramps, tactile tiles, low ticket counters and specially-equipped toilets.

A full report on the expansion of Kuala Lumpur's urban rail network will appear in the February issue of IRJ.