PRINCESS Maha Chakri Sirindhorn of Thailand opened Bangkok’s Mass Rapid Transit Purple Line on August 6 with an inaugural trip on the 23.5km line from Tao Poon to Khlong Bang Phai station in the district of Bang Yai, where the opening ceremony took place. 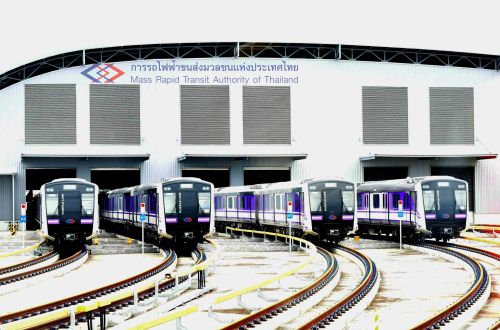 The Baht 60bn ($US 1.7bn) project was implemented by the Mass Rapid Transit Authority of Thailand (MRTA) under a public-private partnership (PPP) scheme, which was financed with a Japanese ODA loan.

MRTA awarded a contract in 2013 to Bangkok Metro Public Company (BMCL) for both the provision of the railway systems and operation of the 16-station line.

Ch Karnchang, Thailand, which is a shareholder in BMCL with MRTA, was responsible for the civil works while a joint venture of Marubeni and Toshiba was selected for the railway systems package which included rolling stock, power supply systems, signalling and control systems and communication systems.

Japan Transport Engineering Company (J-Trec), a subsidiary of East Japan Railway Company (JR East) has supplied a fleet of 21 three-car Sustina trains, which will be maintained by a local JR East subsidiary for the first 10 years of operation.

A free shuttle bus will operate between Tao Poon and Bang Sue station on the MRT Blue Line until a 1.2km western extension of the Blue Line between the two stations opens later this year.