SMRT and Prasarana to form JV for cross-border link 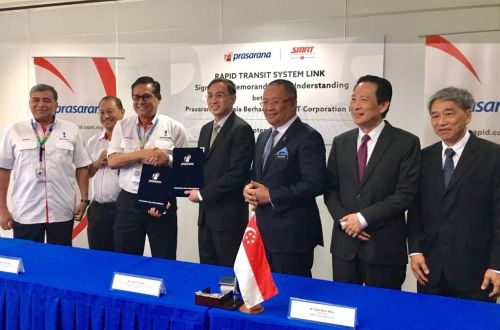 SMRT says the new company will operate the line as well as design, finance, operate, maintain and renew assets such as trains, track and systems.

The cross-border 4km MRT system was first announced in 2010, and ministers from both Malaysia and Singapore said in July that it would open by the end of December 2024. However, the project’s design has yet to be confirmed.
Control of the joint venture company has also yet to be agreed, according to Malaysia’s minister in the prime minister’s department, Mr Abdul Rahman Dahlan.

“We don’t believe it’s a 50:50 basis,” he says. “Logically speaking if it’s 50:50, then sometimes there is deadlock in making decisions. Both sides agree and acknowledge that one party has to take some majority.”

Singapore's RTS terminus will be located at Woodlands North station along the Thomson-East Coast MRT line, while Malaysia has chosen Bukit Chagar as its main terminal for the RTS. The line is expected to have capacity for up to 10,000 passengers per hour, per direction when it is fully operational.