FOR the first time in a decade, a train has crossed the border from South to North Korea as South Korean engineers embark on an 18-day inspection of the north’s railway infrastructure, a key step in a plan to reconnect the two countries’ railways. 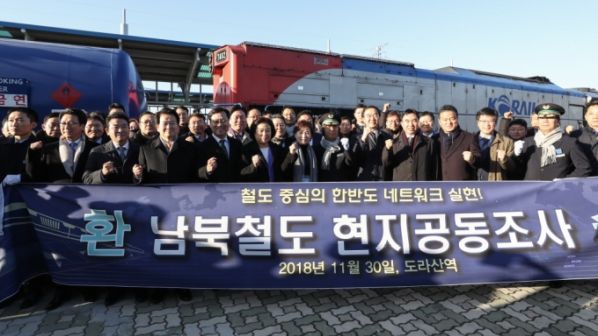 The train with a sign reading “Seoul to Sinuiju” will cover around 2600km, inspecting infrastructure on the 400km Gyeongui line from Gaesong to Sinuiji until December 5, and then the 800km Donghae Line from Mount Geumgang to Tumen River from December 8 until December 17. This will be the first time a train from the south has travelled on this section since the Korean peninsula was divided in 1945.

While the planned inspections have been severely delayed, there is now hope that a groundbreaking ceremony for a project to reintroduce railway services between the two Koreas agreed at the third inter-Korean summit in September could be held before the end of the year.

The train consists of a 55,000-litre tank wagon, a coach with a 300kW generator, a passenger coach with 72 seats, a sleeping car with 28 berths, a couchette car, and a freight wagon. Passengers will remain on the train throughout the duration of the trip with any spare fuel set to return to the south. The United Nation’s Security Council waived sanctions on North Korea to allow the fuel to enter the country.

“Today’s ceremony will be flare that signals the beginning of co-prosperity of the South and the North, and will become a catalyst that expands the economic boundaries of the Korean Peninsula,” says Ms Kim Hyun-mee, Korean minister of Land, Infrastructure and Transport.