THAILAND's government has approved construction of the 187km metre-gauge line from Chira junction to Khon Kaen, which is part of the Transport Ministry's new infrastructure development plan. 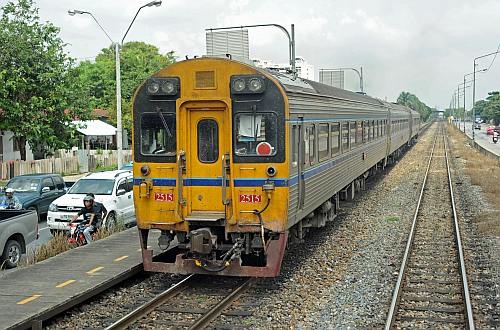 The line is expected to cost Baht 26bn ($US 772m) to construct with work set to begin in the next few months. The government is aiming for operations to start in 2018.

The government plans to invest Baht 1.9 trillion in the eight-year infrastructure programme, which includes two double-track high-speed projects worth Baht 741bn and six standard-gauge double track lines covering 887km. The following lines are included in this element of the plan, which is expected to cost Baht 127bn:

In addition the government secured a soft loan from China in November 2014 to fund construction of the standard-gauge line from Nong Khai on the border with Laos south via Kaeng Khoi where it will split to serve Bangkok and Map Ta Phut in Rayong. The Thai and Chinese governments subsequently signed an agreement to jointly build and operate two lines linking the northeastern province of Nong Khai with Bangkok and Rayong on the east coast in March.

Thai and Chinese officials met in Kunming, China, last week to discuss the project with an agreement yet to be reached on how to fund the project. China is encouraging Thailand to take out loans with Export-Import Bank of China with an interest rate of 2-4%. However, Thai officials think this is too high.

Talks are expected to continue until a feasibility study for the project is launched in August. The Thai government is aiming to start construction on the project by the end of the year, with Thai companies responsible for construction and China handling design and supplying equipment.