Trains set to return to Okinawa

OKINAWA, the only Japanese prefecture without a railway, is to develop plans this year for a 69km line linking the capital Naha on the southern part of Okinawa Island with Nago in the north. 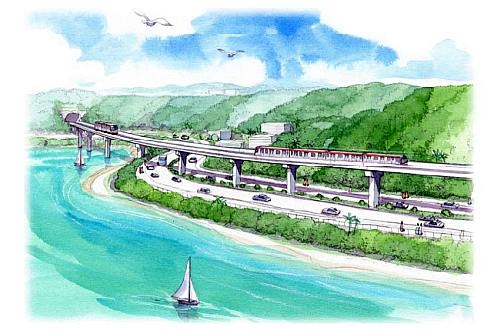 According to a report on the proposals in the Japan Times on February 20, the prefecture suffers some of the worst traffic congestion in Japan. A survey carried out by the Ministry of Land, Infrastructure, Transport, and Tourism in 2010 found main roads in Okinawa were as congested as those in Tokyo and Osaka.

The article states that detailed plans for the project will be drawn up by 2015 with the aim of starting construction in 2019, although the line will not be completed until 2029. Services will be run by a private company and the prefecture expects operations to be profitable if ridership exceeds 40,000 passengers per day.

A 12km monorail line opened in Naha in 2003, but the last of Okinawa's conventional railways, the Minami Daito sugar-cane railway, ceased operations in 1983. A network of railways once radiated from Naha, although much of the system was destroyed during the Second World War and never reopened.

Okinawa has a population of around 1.4 million and the capital Naha is home to 321,000 people.