THE president of Uzbekistan Mr Islam Karimov and his Chinese counterpart Mr Xi Jinping inaugurated the 123.1km Angren - Pap railway on June 22 in an event which also marked the opening of central Asia's longest railway tunnel. 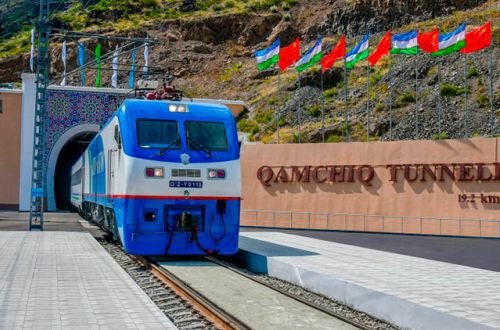 The 19.2km Kamchik Tunnel was built by China Railway Tunnel Group and local contractors, with around 4000 people working on the project. Construction began in 2013 and tracklaying in the $US 810m single-track tunnel was completed on May 25 this year.

The inaugural train was formed of an electric locomotive and four coaches, and completed its passage through the tunnel in 16 minutes and 30 seconds.

In addition to the tunnel, the $US 1.63bn line includes four stations, 25 bridges, and six viaducts with a total length of 2.1km and an average height of 25m. The 1520mm-gauge line is electrified at 3kV dc with two substations supplying traction power.

The new railway provides a direct link between the capital Tashkent and Uzbekistan's second-largest city Namangan and will also enable east-west freight traffic to avoid the transit route through northern Tajikistan. Freight traffic is forecast to be around 10 million tonnes per year with passenger numbers expected to reach around 600,000 in the first year of operation.