UZBEKISTAN Railways (UTY) has entered negotiations with Talgo for two variable-gauge bi-mode trains, according to a report by Trend News Agency, which quotes UTY management as saying that discussions on financing are also underway. 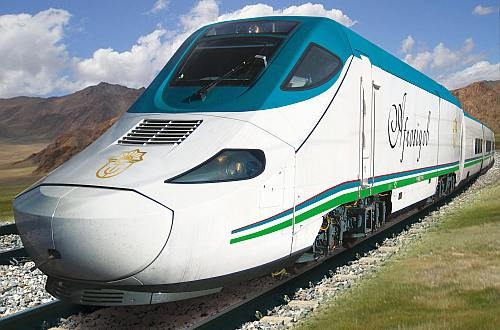 The Talgo 250 Hybrid is formed of two power cars, two generator cars, fitted with MTU 12V 4000 R43L diesel engines (1.8MW each), a bistro vehicle and eight cars accommodating a total of 265-289 passengers. The trains are likely to be used on services from Tashkent to the south of the country.

Talgo is currently converting 15 Renfe S-130 trains to S-730 bi-mode configuration to allow high-speed services to operate on unelectrified parts of the Spanish network. The S-730s can operate at up to 180km/h in diesel mode and 250km/h on electrified standard-gauge lines.