THE Victoria state government has announced ambitious plans for the construction of a 90km underground orbital railway linking key points on the existing Melbourne suburban rail network, and has set an estimated price tag of $A 50bn ($US 36bn) for the project. 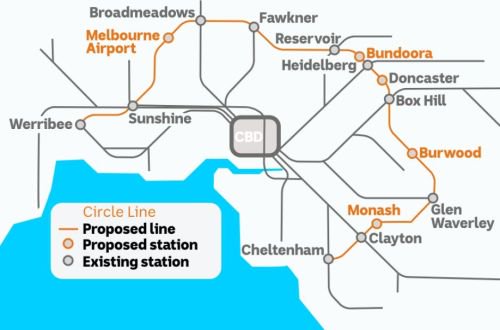 The route for the proposed Melbourne Suburban Rail Loop.

The proposed Suburban Rail Loop would connect all main suburban lines radiating from the centre of Australia’s second largest city, starting with the Frankston line in the south through the northern and eastern suburbs to the Werribee Line in the southwest, including construction of up to 12 new underground stations.

The northeast section will connect the Belgrave Lilydale Line to the Hurstbridge, Mernda, Upfield and Craigieburn lines before heading to Melbourne Airport.

The new Airport Rail Link announced in July would form the northwest section of the new loop, linking into the final section to the Werribee Line via the new Sunshine super-hub.

“Our 100-year-old radial transport network - built to move people in and out of the CBD - can’t keep up with a rapidly growing Victoria,” says premier Mr Daniel Andrews. “No longer will Victorians have to travel into the CBD to get where they want to go. The project will change the way that people move around Melbourne - connecting our suburbs with major employment centres, universities and technical and further education centres, hospitals and retail precincts.”

Strong patronage is projected in both directions throughout the day - with 400,000 daily trips set to make it Victoria’s busiest line by 2051.

Early planning and feasibility work, including identification of the project corridor, has been undertaken by Development Victoria, PricewaterhouseCoopers, and the Office of the Coordinator General over the last year.

Funding is not yet in place and the project has yet to gain bipartisan political support. State, Commonwealth and private sector contributions, as well as value capture opportunities, will be required to fund the $A 50bn project.

If re-elected at this November’s state election, the incumbent government says it will allocate an initial $A 300m for business case development, detailed design and community consultation to commence in 2019, with work on the first stage (Melbourne Airport line) expected to begin by the end of 2022.