AUCKLAND Council’s Finance and Performance Committee agreed in principle on July 26 to go ahead with the purchase of 17 Independently-Powered Electric Multiple Units (IPEMUs), which will replace DMUs on Auckland Transport (AT) suburban services to Pukekohe and expand the fleet as ridership grows. 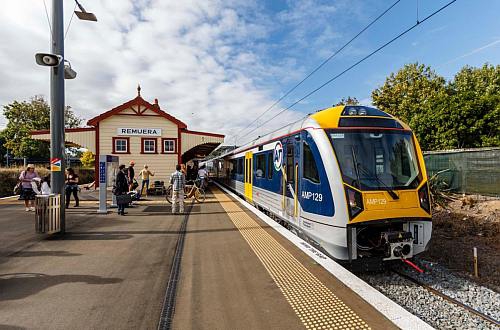 The trains will operate under electric power between Britomart and Papakura, where they will switch to battery mode for the remainder of the journey to Pukekohe. At present passengers have to change from electric to connecting diesel services at Papakura.

The three-car trains will be supplied by CAF, which built the city’s fleet of 57 AM class suburban EMUs.

The business case, which was approved by the AT board in June 2017, considered two options for the procurement. The first was to purchase 15 three-car EMUs at $NZ 133m ($US 100m). The second was to acquire 17 IPEMUs, which would be equipped with a battery system supplied by either LG, Korea (total cost $NZ 174m) or CAF’s own system ($NZ 207m). CAF’s solution was considered to be more well-developed and a lower risk than the newer LG system, which was deemed to require further testing. The CAF option was therefore adopted.

According to the business case, the operational cost saving from eliminating DMU operation totals $NZ 67m.

An initial payment of up to $NZ 25m will need to be made by September to ensure delivery of the first train in mid-2019. The procurement will need to be approved by the New Zealand Transport Agency (NZTA) before this payment can be made, and Auckland is seeking a commitment from the Agency to provide at least 50% of the required funding.

According to the indicative delivery schedule, Pukekohe services will switch to full IPEMU operation in December 2020, with full fleet acceptance by January 2022.

Auckland’s suburban network has witnessed steady ridership growth since the AM class EMUs entered service in 2013. The original business case for the fleet anticipated patronage of 17.8 million in 2017 and 20.8 million in 2023. However, ridership rose by 17% in 2016-17 to 19.6 million, and is now forecast to reach its maximum 21.9 million capacity by mid-2019.

A project is underway to optimise operations using the current fleet, with a review of the seating layout and plans for a new timetable in 2018, which will reduce dwell times.

However, until the City Rail Link opens in 2023, there will be no opportunities to increase frequencies at Britomart station in the city centre. This means the only option will be to increase all remaining three-car services to six cars.