AUCKLAND Transport (AT) has retreated on a plan to order 17 Independently-Powered Electric Multiple Units (IPEMUs) to replace DMUs on suburban services to Pukekohe, opting instead to exercise an option with CAF for 15 additional AM class EMUs. 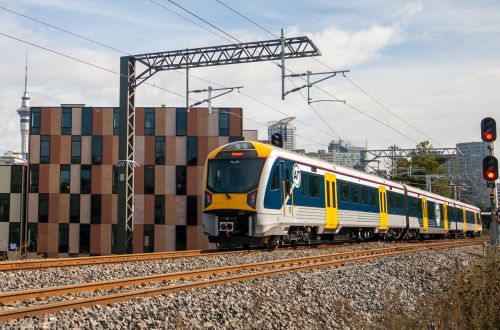 In July Auckland Council’s Finance and Performance Committee agreed to go ahead with the IPEMU purchase based on a business case which had been approved by the AT board the previous month. The business case put forward two options for the procurement - purchasing 15 EMUs at a cost of $NZ 133m ($US 92m) or 17 IPEMUs based on the AM class and equipped with CAF’s own battery system, which had a pricetag of $NZ 207m.

The IPEMUs would have operated under electric power between Britomart and Papakura, switching to battery mode for the remainder of the journey to Pukekohe. At present passengers have to change from electric to connecting diesel services at Papakura. The business case indicated a $NZ 67m cost saving could be achieved by eliminating DMU operation.

Following approval by Auckland Council, the proposal went to the New Zealand Transport Agency (NZTA) for final sign-off. However, in the run-up to New Zealand’s general election on September 23, a political consensus emerged in favour of bringing forward electrification of the Papakura - Pukekohe line, prompting the NZTA to reject the case for battery trains.

Abandonment of the IPEMU plan was subsequently confirmed at a meeting of Auckland Council’s Finance and Performance Committee on October 24. “A key consideration for the IPEMUs over the standard EMUs as the base case option was the ability to operate IPEMUs in the un-electrified network between Pukekohe and Papakura, based on the assumed date of electrification to Pukekohe of 2027/2028,” the meeting notes state. “Subsequent to the council’s decision and just prior to the intended confirmation to proceed by the NZTA board, the government announced its intended funding of electrification from Papakura to Pukekohe. The NZTA board therefore considered that it could not approve the 17 IPEMUs purchase if early electrification would provide a similar service level with the lower-cost EMUs.”

NZTA has agreed to contribute $NZ 65.2m towards the order for 15 three-car EMUs, with the remaining $NZ 65.2m coming from Auckland Council.

The three-car trains will be delivered in 2019, enabling AT to accommodate surging ridership and expand the AM class fleet in readiness for the opening of the City Rail Link in 2023.

CAF says the contract will include an option to equip the trains with battery packs at a later date if required.

Auckland’s suburban network has witnessed steady ridership growth since the AM class EMUs entered service in 2013. The original business case for the fleet anticipated patronage of 17.8 million in 2017 and 20.8 million in 2023. However, ridership rose by 17% in 2016-17 to 19.6 million, and is now forecast to reach its maximum 21.9 million capacity by mid-2019.