CITY Rail Link has issued a call for tender to pre-qualify by March 1 for the C3 stations and tunnels package of the $NZ 3bn ($US 2.18bn) project to build a cross-city line in Auckland, New Zealand. 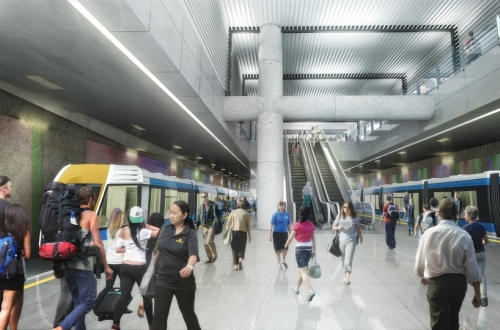 C3 is the largest work package and will interface with many of the other work packages. It includes the design, construction and system testing and commissioning of the majority of the stations and tunnels, while working with the C7 contractor, which covers systems, integration, testing and commissioning, which is responsible for fire and life safety, tunnel ventilation and fire engineering, track, electrification, communications and signalling, systems engineering and achieving operational readiness.

C3 includes the construction of two stations. Aotea station will be built using cut and cover construction, and will be 15m deep and 300m long. Karangahape Road station will be 32m deep and will have 150m-long platforms. Twin-bored 7m- diameter tunnels will link Mount Eden station and the southern end of Aotea station. C3 also includes station maintenance and cleaning.

City Rail Link will extend Auckland’s commuter rail network beyond the existing city centre terminal at Britomart, which will become a through station, to connect with the Western Line at Mount Eden which will be redeveloped. The underground link will be 3.4km long and up to 42m below the city centre streets.

Construction of the early works package on Albert Street and at Britomart started in December 2015 and June 2016 respectively. Expressions of Interest were sought in January for the design, procurement, installation and commissioning of all tunnel track work and rail systems between Britomart and the Western Line at Mount Eden. The main works are expected to start in 2017-18, with completion in 2023-24.