BRITAIN’s Railway Industry Association (RIA) and the Australasian Railway Association (ARA) signed a partnership memorandum of understanding (MOU) on March 7 at a reception hosted by the British Consul-General in Australia. 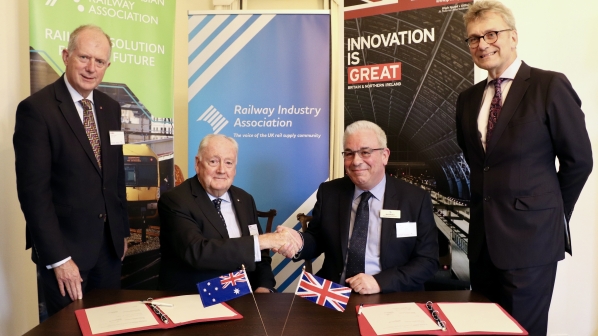 The partnership will see:

“I know Australia’s regions have many exports which Britain is looking to import and rail is a vital part of the mix to get that premium produce from paddock to port to plate,” says Australian deputy prime minister and minister for infrastructure, transport and regional development, Mr Michael McCormack.

“We are undergoing a renaissance in rail in Australia, with major new rail projects in our capital cities and regions over the next decade,” says ARA CEO, Mr Danny Broad. “The opportunity to leverage the skills and expertise of British rail companies will add breadth and depth to our industry, and give Australian businesses valuable insights and partnerships. Working and collaborating with the RIA on common industry challenges will provide consolidation of ideas for possible suitable outcomes for the rail sectors covered by both the ARA and RIA.”

“We are delighted to support this partnership between the UK and Australasian rail industries, which will see the exchange of knowledge and expertise across the two countries,” says RIA chief executive, Mr Darren Caplan. “In Britain, rail exports £800m a year and will play a vital role in achieving the British government’s aim of increasing exports to 35% of GDP, as we exit the European Union.”