THE first of 14 CAF Urbos light rail vehicles for the initial phase of the Canberra Metro light rail network arrived in the Australian Capital Territory on December 13 after completing its voyage from Spain. 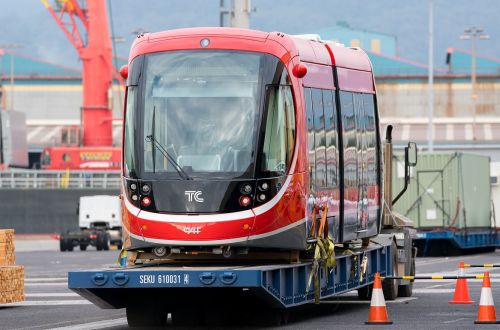 The vehicle was unloaded at Port Botany in Sydney and then transported by road for the remaining 280km to Canberra.

The 33m-long five-section vehicle accommodates 207 passengers. The $A 65m ($US 50m) order with CAF includes a 20-year maintenance provision for the fleet.

The 12km 13-station light rail line is currently under construction and will link the northern suburb of Gungahlin with the city centre and will have 13 stops.

Initial planning is underway on Stage 2 of the network which will extend the line from Civic in the city centre to the southern suburb of Woden.

Services on Stage 1 are expected to start operating towards the end of 2018.