AUSTRALIA’s deputy prime minister and minister for infrastructure and transport Mr Barnaby Joyce attended a ceremony at Tomingley West, New South Wales, on January 15 to mark the delivery of the first batch of rails for the $A 9.3bn ($US 7.4bn) Melbourne - Brisbane Inland Rail project. 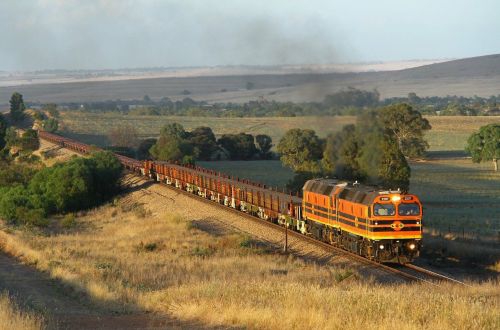 The delivery is the first of 14,000 tonnes of rail being supplied by Liberty OneSteel Whyalla steelworks for the Parkes - Narromine section under a $A 20m contract awarded at the end of last year.

After flash butt welding into 165m lengths at Port Augusta, South Australia, the rail is being transported to various worksites between Parkes and Narromine (P2N) on dedicated trains operated by Genesee & Wyoming Australia.

Over the next eight years, 262,000 tonnes of 60kg/m rail will be laid as part of the Inland Rail project.

Joyce says Inland Rail is a key plank of the government’s commitment to create jobs and investment opportunities for regional Australians. “This project is a game-changer for our regions, creating thousands of jobs nationwide, and returning $A 16bn to the national economy during the delivery phase and the first 50 years of operation,” he says.

Upgrading of the P2N section is expected to begin in May 2018 once all necessary approvals have been received. Works will include reconstruction of the existing track and formation, replacement of bridges and culverts, and improvements to level crossings and passing loops.

This section has been declared critical infrastructure by the NSW state government and the entire project given ‘priority project’ status by Infrastructure Australia.