STAGE 2 of the Gold Coast light rail line in the Australian state of Queensland was opened for commuters on December 18, several weeks ahead of schedule. 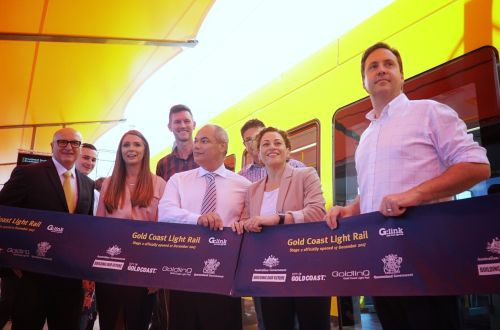 The 7.5km extension links the existing light rail terminus at Gold Coast University with the TransLink station at Helensvale, where it connects with direct suburban rail services to Brisbane.

“With a new tram network linking to heavy rail, public transport on the Gold Coast is in best-ever shape for the upcoming Commonwealth Games in April 2018,” says minister for transport Mr Mark Bailey. “With the expanded Helensvale Station, the transition is seamless, so travelling from the heart of the Gold Coast to the Brisbane CBD or vice-versa is a stress-free experience.”

In January 2018, an extra 158 weekly bus services will be added to the Gold Coast network and several bus routes will be revised to integrate with the light rail network.

Stage 1 of the light rail line, extending 13km from Southport to Broadbeach, began operating in July 2014. Stage 2 has been jointly funded by the state and federal governments, and the City of Gold Coast, and delivered via a public-private partnership with the existing GoldLinQ consortium.