INFRASTRUCTURE Australia (IA), the independent body that advises the federal and state governments on infrastructure priorities and funding, has released a policy paper calling on Australian governments to protect vital corridors to avoid cost overruns when delivering new roads and railways. 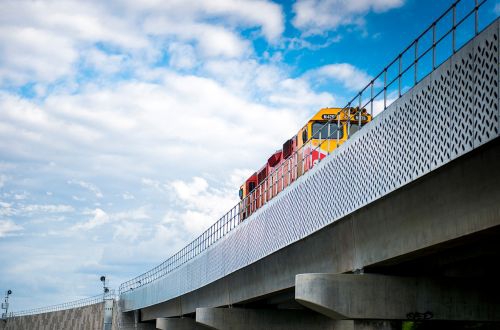 Released as part of IA’s Reform Series, Corridor Protection: Planning and investing for the long term shows that protection and early acquisition of just seven key corridors, could save Australian taxpayers close to $A 11bn ($US 8.7bn) in land purchase and construction costs.

Five of the corridors identified are dedicated rail corridors with the mooted East Coast High Speed Rail top of the list. The others are a proposed Western Sydney Airport passenger link, along with rail freight corridors in Western Sydney and the Hunter Valley, and a link to the Port of Brisbane.
Infrastructure Australia chairman Mr Mark Birrell says meeting Australia’s future growth challenges will require a long-term vision. “As our cities and regions undergo a period of considerable change, strategically important infrastructure corridors need to be preserved early in their planning,” says Birrell. “If we protect infrastructure corridors we will reduce costs, especially minimising the need for underground tunnelling.”

IA research indicates that placing a transport project in a tunnel can multiply its cost per kilometre by between five and 10 times. It found that recent tunnelled-highway proposals are expected to cost around $A 100m per lane kilometre to build.

IA is recommending that a national framework for corridor protection be put in place to guide action by all levels of government with the aim of seeing tangible results over the next 3-5 years.

In its latest update of identified national priorities IA has added the Sydney Metro City & Southwest to its Infrastructure Priority List as a key project.

“Sydney Metro City & Southwest is an important step in ensuring that Sydney remains a competitive, global city,” says Infrastructure Australia chief executive Mr Philip Davies. “The strategic merit of this project lies not just in its ability to increase Sydney's productivity and rail network capacity, but its potential to reshape the urban profile of the city.”