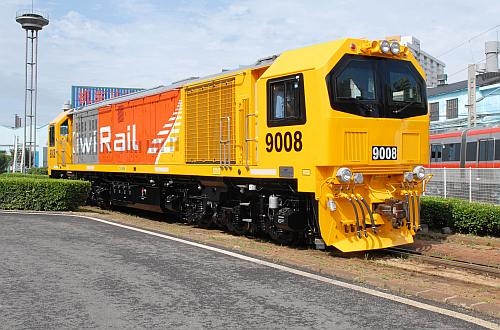 The withdrawal of new Chinese-built DL class locomotives following the discovery of traces of asbestos was a setback for KiwiRail.

Freight revenue fell by 0.4% to $NZ 462m, and Interislander ferry revenue fell 6.2% to $NZ 116.6m. On the plus side, revenue from its Tranzmetro suburban rail services rose 4.9% to $NZ 52.6m while turnover from its long-distance Scenic Journeys passenger unit also climbed 4.8% to $NZ 21m, boosted by charters from cruise ships.

Chief executive Mr Peter Reidy blames KiwiRail's worsening financial performance on a combination of factors. The most significant was the loss of an inter-island ferry for eight weeks after a propeller fell off in the Cook Strait and the subsequent cost of hiring a temporary replacement vessel. Other setbacks included the temporary withdrawal of 40 new Chinese-built DL class locomotives for asbestos removal and a reduction in milk powder and timber traffic due to a slump in global demand for these products.

Reidy says the result highlights the need for the state-owned railway to enhance customer service and reduce costs through improved efficiency. "The bottom line is that we cannot rely on revenue growth alone to get us to a sustainable position," he warns. Specifically, KiwiRail intends to focus on improving asset and staff productivity, with the aim of making processes more efficient and delivering consistent on-time performance.

KiwiRail chairman Mr John Spencer says much hard work and investment is still needed to turn KiwiRail into a sustainable business. "Years of underinvestment, coupled with unexpected events in the first four years of our [turnaround] plan, means making the business sustainable is still a significant challenge," he says.

The New Zealand government has pumped more than $NZ 1bn into KiwiRail since it was established in 2010.