THE first three trains built in India by Bombardier Transportation for the TransLink commuter network in the Australian state of Queensland entered service on the Brisbane - Gold Coast and Airport lines on December 11. 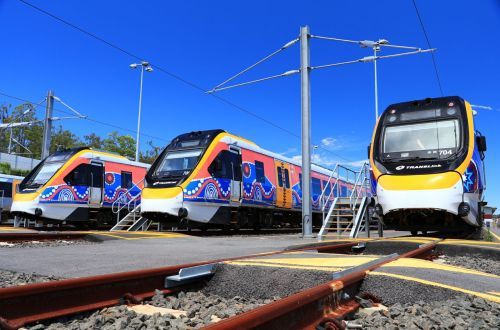 The $A 4.4bn ($US 3.3bn) New Generation Rolling-stock (NGR) project is being delivered under a public-private partnership (PPP) by the Qtectic consortium, comprising Bombardier, John Laing, Itochu and Aberdeen Standard Investments. The project includes the design and delivery of 75 six-car EMUs, construction of a maintenance centre at Wulkuraka in Ipswich, and a 32-year maintenance contract.

With 70% of Queensland’s future population growth targeted in the southeast of the state, the government says the NGR project will provide a 26% capacity increase on the southeast Queensland rail network to meet the growing demand for rail services.

Features of the NGR fleet include capacity for 964 passengers per six-car train, Wi-Fi, CCTV, and LCD infotainment displays.

The first of the new trains arrived in Australia early in 2016, but during acceptance trials a number of problems were identified including concerns over drivers’ line of sight and braking. The Queensland state government’s dissatisfaction saw it place a halt on further deliveries in March this year until all issues were resolved.

Further delays have arisen due to disability access issues. Queensland Rail and the Department of Transport and Main Roads have applied to the Australian Human Rights Commission for a temporary exemption from the Disability Discrimination Act to allow the trains to enter service while modifications are undertaken to the make the trains compliant.