THE preferred route option for the first light rail line in the Australian city of Newcastle was announced on May 23 by Mrs Pru Goward, New South Wales state minister for planning, and transport minister Mrs Gladys Berejiklian. 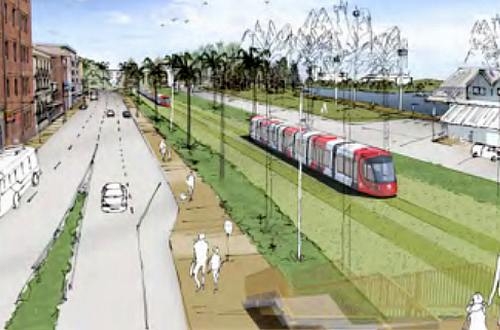 The 2.6km line will run from the new Wickham public transport interchange and follow the existing rail corridor before turning south to follow Hunter Street and Scott Street, terminating at Pacific Park.

The existing railway alignment through the city centre will be freed up by cutting back heavy rail services to Wickham station, although the NSW government says converting the route to light rail will significantly improve access to the waterfront area.

The project will be funded by leasing the Port of Newcastle to a private investor, which was completed last month. In return for the 98-year lease the state will receive $A 1.75bn, $A 1.2bn of which will be allocated to an infrastructure fund. $A 340m will go towards rejuvenating Newcastle city centre.

Goward said community consultation on the light rail project revealed that residents of the city want to see the line extended in the longer-term. "The route strikes the best balance in providing a quality transport outcome for Newcastle and allowing the city and its waterfront to be reconnected and revitalised," says Goward. "Now that this decision has been made the government looks forward to providing more details on the timeline in the near future."