NEW ZEALAND's national railway KiwiRail has reported an annual operating profit of $NZ 108.2m ($US 85.3m) for the financial year ending June 30, an increase of 3.1% compared with the previous financial year. 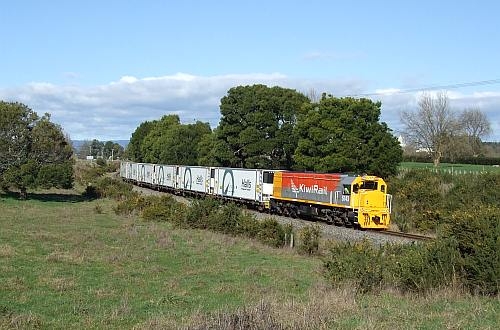 However, after depreciation of $NZ 61.9m and an impairment write-down of $NZ 399.3m of company assets, KiwiRail posted an overall net loss of $NZ 174.6m for the year.

Operating revenue rose to $NZ 727m, more than 25% higher than the total revenue reported in the 2009/10 financial year. Freight revenue rose 2% for the year to $NZ 466.8m on the back of growth in timber traffic together with increased movement of import/export containers and domestic traffic. Capital investment totalled $NZ 337m, most of which was spent on 20 new locomotives and 300 freight wagons from Chinese suppliers.

Outgoing CEO Mr Jim Quinn says customer confidence is rising, as demonstrated by the construction of private sidings to connect factories to the rail network. The most notable is dairy co-operative Fonterra, the world's largest dairy company, which has a built a rail connection to its new $NZ 500m milk powder plant 50kms west of Christchurch, which allows milk powder to be moved by rail to Lyttelton Port of Christchurch for export.