THE first services have operated over the $A 291m ($US 260m) Seaford extension in South Australia, coinciding with the introduction of the first electric suburban services on the Adelaide Metro network. 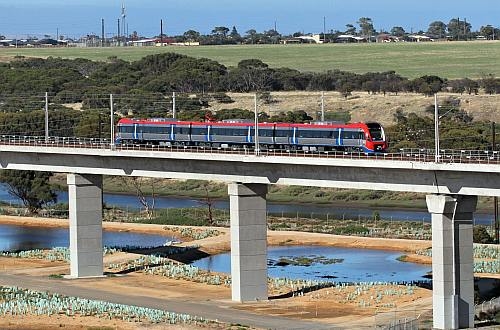 Adelaide is the last of the major Australian state capitals to operate electric services, which have been introduced as part of the state government's Rail Revitalisation programme.

The double-track 5.7km extension from the existing terminus at Noarlunga Centre to Seaford in the growing southern suburbs of Adelaide includes two new stations with park-and-ride facilities at Seaford Meadows and Seaford.

The project also involved the construction of one of Australia's longest railway bridges, a 1.2km elevated concrete structure spanning the Onkaparinga valley.

Electrification of the entire line was carried out from Adelaide to Seaford at 25kV ac in parallel with construction of the extension.

Services between Adelaide and Seaford are currently a mix of diesel and electric as only four of the new Bombardier A-City 4000 class emus are available for service. A further 18 sets are being assembled at Bombardier's plant in Dandenong, Victoria, as part of a $A 269m rolling stock order.

The three-car sets seat around 240 passengers with standing room for a further 300 people.

Plans to extend electrification from Adelaide to Gawler and Outer Harbor were postponed two years ago due budget constraints, but the South Australian government has recently revived plans to electrify as far as Salisbury on the Gawler line.