THE $A 8.3bn ($US 5.7bn) first stage of the Sydney Metro Northwest metro line between Tallawong and Chatswood opened on May 26, with around 140,000 people experiencing free travel for the day on the new service. 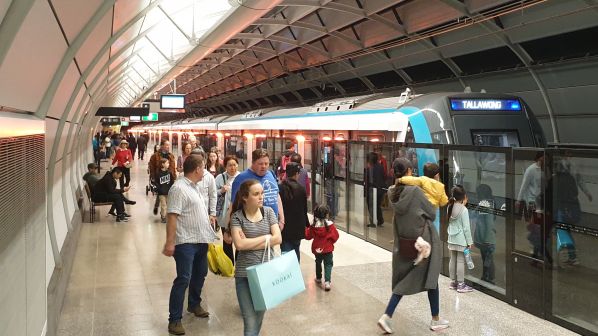 Not only is this Australia’s first metro line it is also the first automated passenger operation in Australia to use driverless trains. In addition, the 13 stations on the line are the first in Australia to be equipped with platform screen doors.

Much of the newly-constructed 23km rail line between Tallawong and Epping is underground with 15.5km in twin tunnels between Bella Vista and Epping, and 4.4km on a continuous viaduct between Kellyville and Rouse Hill. At Epping the new line has been extended to include the former Sydney Trains 13km Epping - Chatswood rail line which has been converted for driverless metro operation.

Chatswood will be the major interchange between Sydney Metro Northwest metro line and the Sydney Trains commuter rail network for access to the city centre until stage two, the Metro Sydney City & Southwest line, opens in 2024. Construction of the $A 12.5bn 30km line is well underway. Two more metro lines are planned to serve the second Sydney airport at Badgery’s Creek and the western suburbs out to Parramatta.

A full report on the Sydney metro will appear in the June issue of IRJ.