QUEENSLAND's deputy premier and minister for transport Ms Jackie Trad announced on August 6 that expressions of interest for the second phase of the Gold Coast light rail network will open on August 10 as the state and the city push to complete the project in time for the 2018 Commonwealth Games. 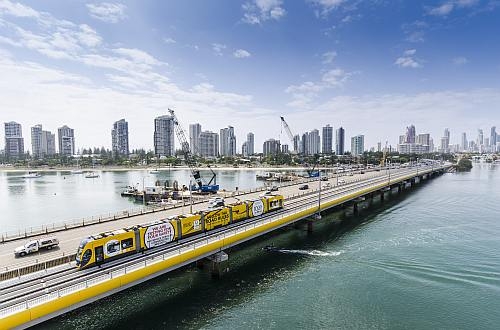 The project will extend the line 7.3km from its current northern terminus at Gold Coast University Hospital (GCUH) along the Smith Street Motorway to serve Parkwood before turning north to follow Queensland Rail's Varsity Lakes - Bowen Hills heavy rail line to an interchange at Helensvale station.

The Queensland government says that this route has been selected because it offers a journey time of 11 minutes between GCUH and Helensvale - seven minutes faster than the alternative route via Olsen Avenue - and could be delivered at less than half the cost within a shortened procurement and construction timetable.

Trad says the constructor and operator of phase 1, the GoldLinQ consortium, has approached the state government with a funding and construction proposal to complete phase 2 in time for the 2018 Commonwealth Games, which will be hosted by Gold Coast.

However, Trad warns that the project can only move forward with the support of the Australian government. "The prime minister recently opened the door to consider providing additional funds towards the Commonwealth Games following a discussion with the Premier at the recent Council of Australian Governments meeting," Trad says. "The Queensland government is now preparing a business case to enable this project to move from the drawing board to construction in time for the Commonwealth Games – contingent on a federal funding contribution."

The closing date for expressions of interest is August 28 and construction is expected to take two years.

The first phase has carried more than six million passengers since it opened in July 2014.