THE first tracks were laid on August 8 on the 12km CBD and South East light rail line under construction in Sydney, Australia. 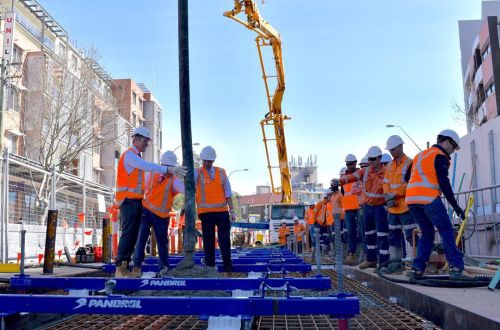 The premier of New South Wales, Mr Mike Baird, and the minister for transport and infrastructure, Mr Andrew Constance, witnessed the first 60m section of track being cemented in place in Anzac Parade.

“We all know congestion is getting worse in Sydney and with daily trips to the city centre expected to increase by almost 25% by 2031, this will help bust congestion,” Constance said.

“Light rail will move up to 13,500 customers in both directions between 07.00 and 19.00 and when combined with express and local bus services, will bring increased transport capacity of up to 30% in the morning peak.”

The $A 2.1bn ($US 1.6bn) PPP project is being implemented by the Altrac Light Rail consortium of Acciona Infrastructure Australia, Transdev Sydney, Alstom Transport Australia and Capella Capital which reached financial closure in February 2015, enabling major construction work to start in October 2015.

The 19-station line will connect Circular Quay, Sydney city centre, and Moore Park where it splits into two branches to serve Randwick and Kensington. Construction is scheduled to be completed in 2018 and services will start running in 2019.