THE final section of the Australian state of Victoria's $A 3.65bn ($US 2.8bn) Regional Rail Link was officially completed on June 14 paving the way for the introduction of new high-frequency timetable on June 21. 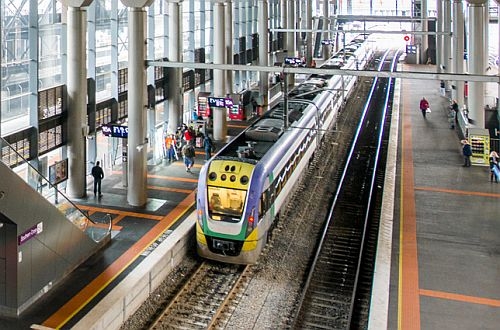 New platform tracks have been created at Melbourne Southern Cross.

Australia's deputy prime minister Mr Warren Truss and the premier of Victoria Mr Daniel Andrews rode on the first passenger train to traverse the final part of the new 90km line which runs from Melbourne Southern Cross to West Werribee.

The project was funded jointly by the federal government which invested $A 2.7bn and Victoria which contributed $A 931m. The scheme is designed to remove major bottlenecks on Victoria's rail network.

Trains from Melbourne to Ballarat and Bendigo now use new dedicated tracks between Melbourne Southern Cross and Sunshine separating them from commuter services. The new section includes two new stations to serve rapidly-growing suburbs at Wyndham Vale and Tarneit.

The new timetable will add 200 services per week between Geelong and Melbourne, with trains running at 10-minute intervals during the morning peak and every 20 minutes off-peak on weekdays. Two extra peak-hour services will run on the Werribee Line, while Ballarat will get an extra morning and evening peak service, and the journey time for Bendigo services will be reduced. Further improvements are planned later this year.

Mr Bob Herbert, interim chairman of the Australasian Railway Association, called for more collaboration between the federal and state governments to build more rail infrastructure in Australian cities. "Population growth will swell the demand for public transport by 55% in Sydney, 121% in Melbourne and around 89% in other capital cities," says Herbert. "State governments cannot be expected to meet this challenge by footing the bill alone; it is time for the federal government, with the support of the private sector, to take decisive action to meet the nation's burgeoning infrastructure needs."