THE government of the Australian state of Victoria says its 2018-19 budget will pave the way for its next big tranche of transport projects, although much of the funding has previously been announced or provision already made in forward estimates. 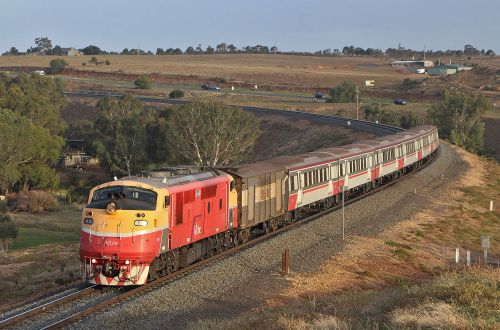 The budget includes funding for the design and procurement of a new generation of regional trains to replace ageing locomotive-hauled stock.
Photo Credit: Mark Carter

$A 103.5m had been allocated for the acquisition of a further five Alstom X’Trapolis six-car EMUS to meet increasing demand on the Melbourne suburban network and support higher frequencies.

The budget includes $A 571.5m for power and signalling upgrades on the Cranbourne and Pakenham line, planning for track-doubling on the Cranbourne line and detailed design work to enable new high-capacity suburban trains to run through to Sunbury.

Work will start on improving some of Melbourne’s busiest stations with $A 16.3m for accessibility improvements at Essendon and Watergardens stations, and the development of business cases for upgrades to major interchange stations, including Broadmeadows and Pakenham.

Improved interchange between trains and trams at South Yarra Station is planned with $A 12.33m for a wider station entrance and fully-accessible tram stops - the first stage of a new South Yarra station precinct.

In regional Victoria, $A 313m is allocated for Stage 2 of the Shepparton line upgrade, which will enable Melbourne - Shepparton services to be stepped up from four to nine return services a day. Work is already underway on the first stage of the project with $A 43.5m funded in the previous budget.

Track and signalling upgrades across the Maryborough, Ararat and Ballarat area will be delivered with A$ 130m to improve the reliability of the regional rail network. This is an essential requirement for the future return of passenger services to Dunolly.

$A 172.9m will be committed to the construction of new train stabling and maintenance facilities and the upgrading of Southern Cross Rail Yards for stabling of the regional train fleet, which is currently being expanded.

A further $A 15.8m has been allocated to finalise design and procurement for a new generation of regional trains to replace the ageing locomotive-hauled fleet still in use on some V/Line services.