EARLY works have started at the site of the new Woolloongabba station on the $A5.4bn ($US 4.27bn) Cross River rail project in Brisbane, which is being entirely funded by the Queensland government following its failure to obtain federal funds. 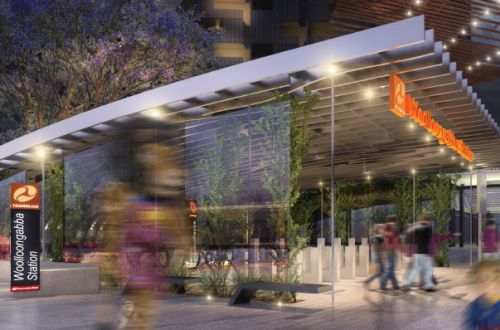 Artist's impression of the entrance to Wooloongabba station.

“This is an important milestone as it marks the start of official works for this historic infrastructure project for Queensland,” says the premier Mrs Annastacia Palaszczuk. “Over the next few months, Queenslanders will see activity ramp up with bore drilling, the demolition of the GoPrint site and the relocation of electrical substations.”

“Through our new ‘Buy Queensland procurement policy we want to ensure a significant amount of work is done by local construction companies and local workers,” Palazcuzuk says. More than 500 construction and engineering representatives were due to attend an industry briefing on August 30 organised by Cross River Rail Delivery Authority to learn more about the procurement process.

Cross River Rail is a new 10.2km line which run from Dutton Park to the east of Bowen Hills, including a 5.9km tunnel under the Brisbane River and city centre. There will be five new stations including an interchange with Roma Street main line station and the existing suburban network at Boggo Road. The new line is due to open in 2024.